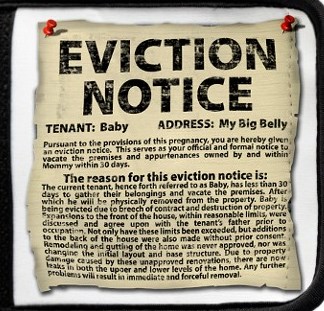 Everyone loves to hear the story of how I was almost born on the FDR Drive, which runs along the East side of Manhattan.

We lived in the Bronx, but the hospital was in Manhattan. I came out so fast,

I was crowning in a 1960’s woody on the FDR somewhere in Spanish Harlem.

I’m having have that printed on a tee shirt.

I just assumed my baby would arrive just as expeditiously.

By week 40, I had blown up like a ball park frank.

There was no sign that I was EVER going to deliver this baby.

Look that up. I’m not providing a Wikipedia link to that shiz.

I WAS SO DONE WITH BEING PREGNANT.

Everyone had advice for me.

Do the labor-inducing “pregnancy dance” (this is a THING; you can watch the YouTube videos.)

I did not feel like dancing. I wanted to punch random people in the side of the head.

Nipple stimulation (Three HOURS a DAY to release oxytocin. As lovely as it was that my now gargantuan breasts had eclipsed Playboy and gone to National Geographic status, I did not have all day to spend copping a feel on myself.)

A doula informed me that the most effective way to dilate a cervix was with sperm.

Doulas are midwives who try to brainwash you into giving birth at home. Without drugs.

They have hairy armpits and want you to crank that baby out in a candlelit bathtub while womyn hold hands around you, singing Kumbaya.

But I had done some research on the Internet regarding dilation of the cervix with sperm, and apparently, there was some truth to this.

So, we propped me up with pillows.

“Honey, just do this please. Jesus, it never took you this long before.

Talk dirty to you?”

My friend Destiny had gone into labor with both her daughters while walking through the mall.

She claimed it was the best way.

I HATE malls. But I was elephantine. And desperate.

I walked the mall leaving a sweaty trail of crumbs between Auntie Anne’s and Mrs. Fields.

I rehearsed my story:

“I was trying on shoes (as if any would fit around my disgusting bloated Shrek feet) at Nordstorms when my water broke.”

Nothing. Nary a twinge.

My due date came and went. And went.

I stopped answering the phone.

“Hello, you’ve reached Samara. I’ve not had the baby

Finally the doctors in my OBYGYN group decided to induce labor.

I arrived at the hospital at 7:30 am on a Tuesday morning, husband in tow, with books to kill the time while they pumped me with drugs.

I was hooked up to 75 machines. I’d been instructed not to eat, so I soon became curmudgeonly.

The doctors told us I was in for the long haul, so my husband escaped – purportedly to do some “errands” – and I started to read.

a team of midgets.

Then, they broke out the pitocin.

JUMPING JESUS ON A POGO STICK.

My contractions were instant and agonizing.

I refused pain meds – because the doctors said it would slow down labor.

So, like millions of women before me, I just endured it.

Keep in mind – I have a low threshold of pain and a high sense of drama.

My husband showed up.

Whose guts I MASSIVELY hated, now that ELECTRIC FIREBALLS OF DEATH were being lacerated into my uterus,

while he sat around and munched on Five Guys Hamburgers.

All those techniques you learn in Lamaze –

I managed to find a position that was semi-tolerable – on my side, half on the bed and half off,

with my tongue hanging out of my mouth.

Like a dog, who’d been locked in a car on a hot day.

And was now having heat stroke.

This was nothing like anything I’d seen on on “The Baby Story” and I’d watched a TON of them.

Throughout this debacle, the various doctors in my OBGYN group couldn’t understand why I didn’t just wave a white flag and say, “CUT ME ALREADY!!”

I wanted the experience of pushing my baby out of my body. I wanted that centuries-old female rite of passage.

Looking back, I have no idea why I was so committed to the idea of having this thing literally tear me a new asshole. But, I was.

So, they just made little “tsking” sounds as I descended further into madness. Said I was “tenacious.” And that the baby was not in danger.

The only one suffering was me.

The whole next day was blur of pitocin, excruciating contractions, beeping monitors, nurses bustling around, my husband smelling of whatever he’d eaten.

I was exhausted, starving, and delirious with pain.

By dinnertime I’d listened to now a SECOND baby being born in the room next door. I officially went insane.

“Put me next door!! That’s where all the babies are born!! I want to move next door!”

My husband tried to reason with me.

They rolled me and all my beeping monitors into the room next door.

I still never dilated past 2 centimeters.

At 9pm my doctor stopped in to see how I was doing. Chatted with my husband.

I had been given pitocin for 36 hours almost continuously. I no longer felt pain –

My husband had given up even trying to come near me.

Everytime he did, my head spun around 360 degrees

and I spewed obscenities and pea soup on him.

“YOUR MOTHER SUCKS COCKS IN HELL!”

(okay, I didn’t say that, but that is a great line from The Exorcist)

I looked up at my doctor through unfocused, bloodshot eyes.

He and my husband were watching The Victoria Secret Lingerie Special on TV.

I DID NOT “IMAGINE” THIS.

He asked how I was.

“I’m just peachy. Other than having to figure out how to home school this child in my uterus.”

Dr. Norwich said, “You’ve officially broken the record for the longest labor in this hospital. Were you trying to set a new record?”

All of a sudden-

The machines went crazy. The nurses began rushing around. The doctor said the baby’s heartbeat was faltering.

They unplugged me, wheeled me into surgery.

I SCREAMED at the doctor, nurses, orderlies that they were trying to kill my baby.

I am absolutely terrified of surgery.

All I remember about that room was that it was the whitest, most unforgiving room I’d ever seen.

And that there seemed to be many more people in it than there should be.

At least a dozen. Why on earth were there so many?

I don’t remember any details of the surgery.

when my son was born

everyone in the room sang out,

only they used his real name, which we had already picked out.

And tears streamed down my face. And my husband’s.

Our baby was gorgeous. Like C-section babies always are.

And my doctor exclaimed,

“Oh my God! I’ve given birth to a deformed child! He has a wing instead of an arm! Oh, no!”

“Your baby is perfect.

West Wing is on.”

And so it began…

Do you have a baby delivery tale to tell? Or your wife’s, mother’s, or sister’s?