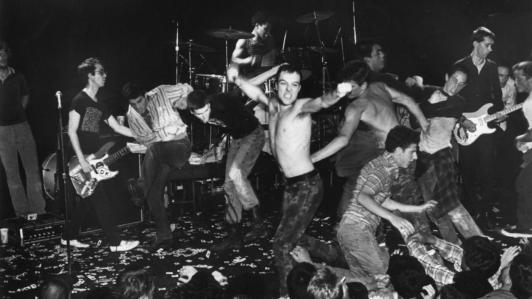 My coke dealer Harold asked me to “babysit” his girlfriend Lisa when she went out clubbing. I could understand why. She was only 16; a high school girl who had run away from her parents in Scarsdale to live in charming squalor with Harold in his East Village apartment. I called her “Lolisa.”

I didn’t question the ethics of a 30-year-old man living with a 16-year-old girl. In 1991, I didn’t question much of anything. Besides, Harold was successful in his own way; confident, funny, smart. He would have made the perfect Jewish boyfriend were it not for the trickle of powdery white snot that always snaked down from his nostril onto an upper lip he was too numb to feel.

Harold had an international connection which provided him with cocaine much purer than typical street coke. I figured out that I could step on it with my own cut formula and redistribute it to my friends. So, if Harold wanted me to babysit Lolisa while he ran his business, I would comply.

One night, she and I were hanging at the bar at CBGB’s when the band “The Exploited” walked in. They were a Scottish hardcore punk band.

Hardcore punk was punk on steroids; faster, more violent, more dangerous. Hardcore wasn’t my scene but these guys were wildly funny. They chatted us up and invited us to see them play that Sunday.

Hell YEAH. Hardcore fans or not, we knew The Exploited were riding the wave of their most successful album to date. Who doesn’t want to party with the band?

The show was savage and chaotic. Punks were injured by frenetic slam dancing and stage diving. I wasn’t into the music, but I was WAY into their bass player, Smeeks. He was handsome, muscled and mohawked. Wattie, the lead singer, was all over Lisa. With his gargantuan bright crimson mohawk and anti-hero demeanor, he was an even better way for Lisa to say “fuck you” to Scarsdale.

The girls who were part of the hardcore scene were PISSED. Who were WE to be hanging out with their idols? The leader of the pack was Lazar, a wolverine with half her head shorn, the other half bleached and ragged, an upside-down cross tattooed on the side of her face.

That’s commitment to a fucked-up lifestyle right there. Ink like that.

We were impervious to their threats. We were with THE BAND.

After the show, we milled around on the street while they loaded up a van with all their equipment. Finally, the band, the roadies, the sound guy and various other members of their entourage piled in. Wattie said, “Come on, ladies! Get in!”

I peeked inside. There were at least 12 guys in there. Getting into a van with a dozen drunken Scots suddenly seemed like a baaaad idea.

“It’s too crowded in there! We’ll catch a cab and meet you uptown.”

They took off, slamming the back doors shut.

I felt them before I saw them.

The hardcore girls were a pack of angry she-beasts; snarling, spitting and snapping their jaws at us.

I was supposedly watching out for Lisa, so I stepped in front of her protectively. Lazar pounced on me with a searing punch to the side of my head. I went down. It became an all-out brawl with the gang of them punching and kicking me. With industrial Doc Martens, the kind reinforced in the toe with steel.

I heard, but couldn’t see, Lisa also getting beaten. The girls were chanting “GIVE US YOUR LEATHERS” which was a British punk gang thing. Though American, they adopted all things British punk, even affecting a cockney accent. Stealing leather jackets was a street victory.

They would have to beat me unconscious before I gave up my jacket. They got Lisa’s off, and held it up victoriously, screaming “Oi! Oi!,” a British punk war cry. It was at that point that I managed to escape.

I staggered to my feet, and in one of the most cowardly moves of my life, I fled, leaving Lisa there to fend for herself.

Bloody and disoriented, I tried to flag down a cab but none would stop for me. I looked like trouble, and New York cabbies avoid trouble. I  saw a couple flagging a cab, and when it stopped, I jumped in with them. The man demanded that I get out, but the woman with him was more sympathetic to my plight. We drove back for LIsa, but she and the crowd were gone.

I went to my boyfriend’s apartment. I had stabbing pains in my chest and he insisted I go to the Emergency Room. I stubbornly refused to let him call an ambulance. We walked out onto the street and he found a deserted shopping cart and put me in it, wrapping me tenderly in a blanket.

He pushed me 20 blocks to Beth Israel Hospital, where doctors determined that I had a concussion, a dislocated shoulder and several broken ribs.

Harold never spoke to me again. Lisa had gotten beaten up even worse than I had, and returned to her family’s home in Scarsdale. Her parents hired an attorney and tried to press charges against Lazar and her hellions, but no one was willing to testify as a witness to the event. The charges were dropped.

What didn’t heal was my profound sense of shame for abandoning Lisa. Twenty five years later, I still regret it.

This was a defining moment in the development of my core values. After that, I became a fiercely loyal friend. I will stand up, against all odds, for the people I love. In my opinion, too many people have a weak and diminished sense of friendship, wanting to stay neutral to all and loyal to none. Too concerned about what opportunities they may lose if they “choose sides.” Stay in friendships that have crossed boundaries because personal gains are at stake.

Perhaps that works for them. But they are missing out on the one of life’s great experiences – that of being a true soul friend.

Have you ever been in the wrong place at the wrong time? Did you learn any lessons from the experience?
Do you have any true soul friends?
Talk to me. I’m listening.

Hang out with me on Facebook! I say funny things there.