What to REALLY Expect When You’re Expecting: Pregnancy Sucks ASS! 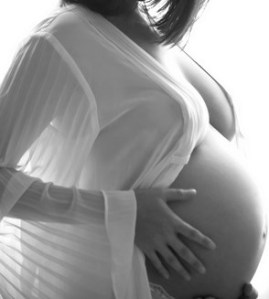 “I loved being pregnant!”

Women who say this are lying.

I know couples stretch medical intervention as far as it can go just to have a child. I do not want to minimize this.

But my pregnancy offered me such state-of-the-art suckage that I think mothers all over the globe have made a pact to say they “loved being pregnant,” so women won’t be afraid to get dragged into this mess.

It’s a LIE, along with “size doesn’t matter” (sorry, but you can’t make butter with a toothpick) and “you’ll look back at this and laugh” (no, I’ll block this out with as much alcohol as I can).

First trimester of the parasite incubation: I threw up constantly.

What perverse human being named it “morning sickness,” when I horked constantly?

It’s like being savagely hung over all the time, minus the fun of having been stupid drunk enough to flirt inappropriately with your husband’s best friend all night.

The smell of anything made me ill. Particularly cooked food. If my husband tried to cook I would growl like Quasimodo “me sick no you smell up house blechhhhhhh grrrghhhh”

The only thing that made me feel better was bread. Fuck salad and grilled fish.

Pass me a loaf of Italian bread. That’s right, I said the whole loaf.

And I had narcolepsy. It reminded me of the old days, when I was incredibly stoned, and I would just pass out in the middle of a  zzzzzzzzzzzzzzzzzz…

Second trimester. The morning sickness faded. The euphoria kicked in. Mother Nature’s little way of tricking you into thinking you’re not about to ruin your whole life, drain your bank account and give up your dreams.

Can we just talk about this for a minute?

I’ve been on the low-end of the alphabet my whole life. And then all of a sudden, WOWZA! My tits got huge! Like, double D ginormous! And round and high to the point of looking fake.

My libido went into overdrive. Nobody warned me about THIS.

I craved sex as much as I craved food. My second trimester was happy happy time.  Such irony. The sex drive of a nympho stuffed into the body of a manatee.

I was delirious enough to ask for a pregnancy photo shoot for my birthday. With nudes. Such is the power of the second trimester lunacy. You think you look HOT.

And my energy level – it rivaled that of a meth addict! I nested! I fixed the whole house up!  I cleaned out every closet. Reorganized every room. Fixed up the nursery.

It spiraled out of control. I removed the shower doors and took them out for a real scouring.

I scrubbed the inside of the washing machine, declaring it not clean enough for the baby’s clothes. I cleaned toilet bowls with a toothbrush.

Wait – is this my husband’s toothbrush? oopsie

The nesting and euphoria was short-lived. By the third trimester, I was miserable.

It was August and I was ferociously hot all the time. Even with the air conditioning on full blast I sweated like a Miami hooker.

It was a hot, hot summer. I did not do my third trimester in style.

I waddled around in Naturalizer sandals, an oversized tee-shirt and my husband’s boxer shorts. I gained a LOT of weight. A lot. None of your business.

To this day, when women tell me “I only gained 18 pounds when I was pregnant” I hyperventilate. FUCK them. What were they carrying, crack babies?

Meanwhile, the Rockettes had taken up residence in my uterus.

We never got to the sweet little “feel it here, honey, he’s kicking” stage. No – Mondo the Donkey gave me kicks to the cervix that sent electric fireballs to my vagina.

We’d be watching television, and my stomach would suddenly distort. I felt like Ellen Ripley in “Alien 3.”

“WHAT was that?” my husband would ask, in horror.

“Ow, owwwww, that’s your son, roundhouse kicking me in the uterus, dumb ass!”

Then, there was the whole “he’s right next to my bladder” thing. Break out the Depends. And you thought they were just for old people. Nobody likes someone who smells like urine, unless they’ve hired you off of Craig’s list.

He wasn’t one of those “you’re beautiful even in your 8th month” kind of dudes. He was more like, “umm, call me when you get your tight little pre-baby body back.” Asshole.

Then again, the only one who’d get a hard-on looking at me in my third trimester was Shamu at Sea World.

“Samara, baby, you are so effing hot 9 months pregnant”

Sleep now became impossible. I was exhausted, but there was no way to get comfortable.

Now I was a narcoleptic meth amphetamine addict. Most nights, I ended up in the rocker recliner in the nursery.

Woke up 50 times a night wondering, why can’t I feel my legs? Was I having a stroke? I thought that only happened years later, when your kids are teenagers.

And as the countdown to lift-off draws closer, the absurdities of pregnancy come thick and fast.

My feet got a starring role in “Shrek’s Cankle’s,  the Sequel.” 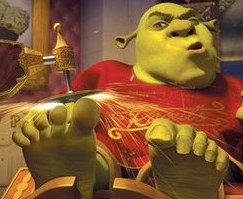 except mine looked worse

I lost the ability to think. I would find myself in rooms of the house and not have a clue why I was there.

People gave me the weirdest name suggestions. No. “Apple ” is not a name for anything except a fruit.

You BITCH! You named me “#Hashtag?”

People suggested I take videos of the birth.

When would I show that? Thanksgiving dinner? “Pass the pumpkin pie, here’s where I push something the size of a cat out of my punani?”

Little Dude is ten, and even though he’s a walking advertisement for birth control, I’m delighted I had him.

I’ve finally forgiven him the trauma of my pregnancy. Just last night he came in my room at 3 am – he had a bad dream.

“Mama, do you know that googol is a number?”

“No, you were writing. You turned off the light when I came in. Which is bigger, googol or infinity?”

And then, we talked about googol versus infinity.

His childhood does not, which is why we cuddled and talked in the dark until 4:30 in the morning.

50 responses to What to REALLY Expect When You’re Expecting: Pregnancy Sucks ASS!